The Accidental Prime Minister: A flimsy excuse for a blinkered film

As India gears up for the 2019 general elections, the strategic move to release a potentially controversial film that seeks to target a prominent political family in India, did not just instill curiosity but was also expected to cause unrest, as is the norm today. However, as one sits through the one hour fifty minute film, it leaves you gawking at the sheer ineptitude of the makers who claimed to be embarking on a route that is seldom taken by the likes and could cause discomfort in an already heated political climate. Based on the political memoir by Sanjaya Baru, ‘The Accidental Prime Minister: the making and unmaking of Manmohan Singh’, the film created an uproar as soon as its trailers were dropped. Discussions around the film also stemmed from the fact that unlike other historical dramas and biopics, Dr. Manmohan Singh (who assumed office from 2004-2014) is not a figure of the past, and remains pertinent to public memory till date.

In an attempt to paint the Gandhi family as Machiavellian in their ways, the film depicts the events that unfold after the victory of the United Progressive Alliance (UPA) in the 2004 general elections following Sonia Gandhi’s decision to nominate Dr. Manmohan Singh as the Prime Minister of the cabinet. The screenplay, based on the memoir by Sanjaya Baru, cherry-picks instances of national importance and political crisis while conveniently dropping them or referring to them in passing. Major political scandals such as the 2G spectrum case, the coal allocation scam and periods of considerable turmoil like those during the Indo-US Nuclear Deal are strewn all over the film and snippets of real footage from speeches of political opponents such as the BJP are played repeatedly, adding to the already slapdash approach. Sanjaya Baru may have been an insider to the workings of the political regime during his tenure as media advisor to the former Prime Minister, but there is little that the film has to offer to its viewers to better the already skewed understanding of events. Four writers, including Mayank Tewari, (known for the screenplay of the critically acclaimed film ‘Newton’) penned the script for the film, yet it fails to establish itself as a relevant or coherent narrative.

Anupam Kher essays the role of Dr. Manmohan Singh, but fails to embody the essence of the character. Undue emphasis has been placed on the physicalities and outward mannerisms, while overlooking the qualities of a leader who is known for his sharp wit and contribution to the Indian economy. Kher’s body language is submissive and robotic, making him look like a caricature of the erstwhile Prime Minister. Suzanne Bernert as Sonia Gandhi is stiff and unconvincing as she steps into the shoes of the woman who is instrumental to the functioning of the United Progressive Alliance (UPA). Surprisingly, while the emphasis has clearly been on casting look-alikes of politicians, the only person who does not seem to fit the bill is Akshaye Khanna who plays the role of Sanjaya Baru, media advisor to Dr. Singh from 2004 to 2008. Debutant director Vijay Ratnakar Gutte chose to portray Baru as the character who often breaks the fourth wall and interacts with the audiences. However, this gimmick has been overused in the film and Akshaye Khanna as the cynical and arrogant Baru fails to strike a chord despite the persistent efforts to look complacent. As one looks for ways to keep themselves entertained, spotting the innumerable lookalikes of politicians throughout the film may seem like a wise decision. Naveen Patnaik, P.Chidambaram, Atal Bihari Vajpayee, Natwar Singh, Ahmed Patel -you name it and they have it! However, despite the arduous efforts to cast the perfect on-screen counterparts, the makers perhaps considered it futile to invest in a proper costume and wig for the artist who plays the role of APJ Abdul Kalam. Amidst other chucklesome frames, he is seen nodding from a distance in a supposedly crucial scene preceding the Indo-US Nuclear Deal. 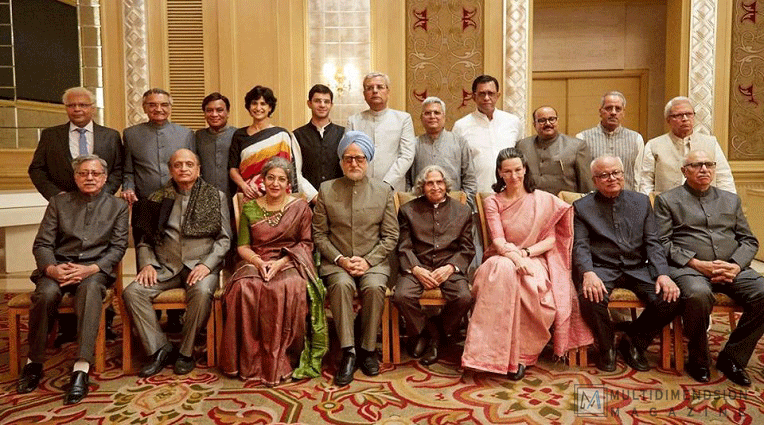 The underlying message in the film is clear and repetitive, Dr. Manmohan Singh was weak and helpless as the Prime Minister who could not curb rampant corruption during the regime because he was constantly bullied by a control freak and her affiliates. That is perhaps all there is to a film that does not shy away from naming politicians, but bleeps out certain dialogues, forcing one to lip-read. The overwhelming yet deafening background score, clumsy production design, excessive camera movement, and poorly structured screenplay are clear indicators of a botched attempt at making a film.

The Accidental Prime Minister at the very outset may have claimed fictionalise the characters, events, and incidents for entertainment, but to label it as a ‘propaganda film’ would be futile because it is technically and creatively ineffectual and shambolic.