Krav Maga in the Era of #metoo

Despite #metoo and #timesup, society is slow to change. I believe it is better to be prepared by learning self-defence than risk assuming that every individual can fast unlearn habits that have been ingrained in society for years. Many thoughts cross my mind as I go through a typical Krav Maga class. It may have just begun as a self-defence course I signed up to defend against assault, but along the way, it has reinforced important life lessons for me.

As I enter the gym, I make my way across the basketball court where the men’s team doing warm-ups and enter the room we use for our Thursday night class. I take in the walls decorated with inspirational figures, (Muhammad Ali is, of course, present), the punching bags hanging from the ceiling, two miniature sized boxing rings, and the lingering scent of sweat in the air. Putting on my protective gear, I mentally go over what we learnt in previous lessons and I ready myself for the physical and emotional exertion of the class.

As we begin our warm-ups, my mind wanders to other classes. The ones that come rushing to the front of my mind all end with me walking home crying; the opposite effect of what I hoped these classes would produce in me. As we do our mandatory sit-ups, I think back on a particularly intensive class where we worked with a partner; one person assumed the role of the attacker and the other of the victim on the floor. Throughout the exercise, I could feel myself getting frustrated as I didn’t manage to either successfully attack or defend. Real life scenarios where I felt vulnerable flashed before my eyes…a man old enough to be my father repeatedly asking and attempting to kiss me despite my protests, a hand casually resting on my thigh just that bit too long after a sudden stop of the subway for it to be an accident, a stranger rubbing himself up and down against me while I waited for the July 14th parade to start, countless friends of mine “nice guys”, taking advantage of my drunken state, actually climbing into bed with me when it was offered that I could sleep in the bed and him on the couch…what’s even worse is that at the time, I thought to myself that I should have known better. Of course someone offering for you to stay at their place is code, how could I have been so naïve?

The sensible part of me knows that these scenarios in class aren’t real, that they are play-acting so that we learn moves to fend off real-life attackers. But that doesn’t stop the feelings of terror creeping up on me that these scenarios could come true. And what if they do? Will I be strong enough to defend myself or will I be at the mercy of strangers? This safe space to try out scenarios and learn how to conquer potential attackers felt like just an extension of the danger zone in that instant. This is despite the fact that everyone there is in tune with each other, constantly asking each other if we’re ok and not attacking with100% of our strength.

Coming home from that class, I was a wreck. Why was I so weak? So feeble? Why couldn’t I fend anyone off?

Our warm-ups have ended and we are getting our gloves on ready to do the drill that feels like a dance sequence at this point…punch with the left arm, then right arm and aim for the head while our partner ducks to avoid the punch…Just like this drill, we are about to practice, I force myself to remember the same words of wisdom I heard from my flatmate, my mum, my friends…These scenarios aren’t real, you aren’t in danger right now. You are here to learn how to defend yourself, but it will take time. Trust the process and your colleagues.

I smile to myself as I let this thought course through me and turn to the person beside me who will undoubtedly be my partner for the rest of the evening. The coach makes his way around the room, correcting our stances and punching techniques. It’s somewhat of a paradox for me, making sure I remember all these moves and stances perfectly. I have had music lessons all my life. I learn pieces to perfection in the hopes of performing them in a concert or attaining high marks in an exam. However, here I am, making sure I master all these moves while both hoping that I never will have to use them or that if I do, just like if I should play a wrong note in a piano piece, I am able to recover and get the upper hand against my attacker.

My partner and I have switched roles. I am now in the offensive role. It is not in my nature to attack anyone or even really stand up for myself, and I don’t want Krav Maga to change who I am as a person, well, except maybe for the whole standing up for myself side of things. Every time I put my Krav Maga clothes on, I am putting on a uniform; in the same way as me donning my formal work attire complete with makeup is (I don’t generally wear makeup outside work). And part of that uniform is being able to seamlessly go from attacker to victim. It’s not me attacking the person in front of me, but like a soldier version of myself. And just like our coach reminds us, don’t get frustrated if a punch doesn’t go the right way. The frustration will just get in our head and prevent us from recovering enough to throw a successful one. If any positive experience comes from my Krav Maga classes, let it be me learning how to defend and, in turn, stand up for myself on a physical and mental level. 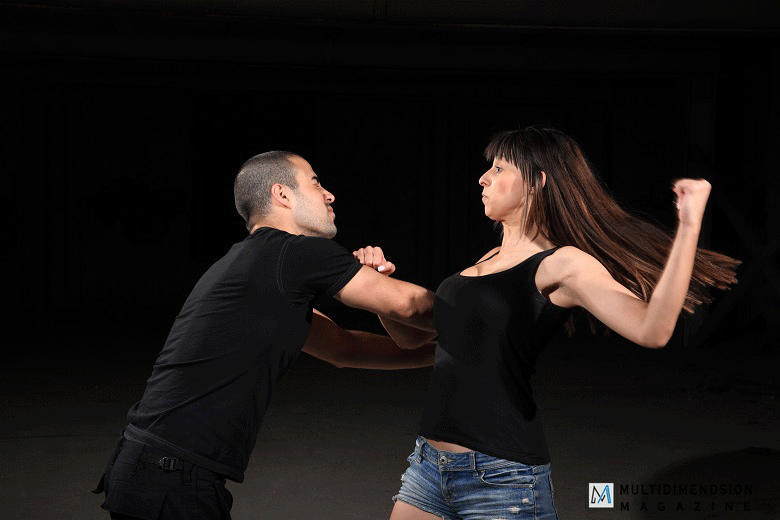 As we start preparing for our cool down, I reflect on why I initially signed up for Krav Maga. Yes, in a perfect society, our boys and girls would be taught to respect others and sexual assault would be a thing of the past. I am hopeful the next generation will be more in tune with this, especially in the wake of #metoo and #timesup. However, certainly with my age group and those above it, in my opinion, it is dangerous to assume that expressions such as “no means convince me”, understanding the difference between flirtation and assault, and victim blaming can be so easily unlearnt. I do understand that many people might just take these classes in case of assault by some random person on the street or at the pub. Yes, I’m certainly taking it for that, but unfortunately, sexual assault tends to be perpetrated more often by people we know than some dude in a back alleyway with a knife. So I am taking it for both, to protect myself from strangers that might want to harm me but also from a so-called friend who might not realise what they are doing is wrong. I want to feel in control and not helpless should a situation arise. We now celebrate women like Wonder Woman who can take care of herself, and no longer so-called “maidens in distress” that need someone to save them. Let us be like that in the real world.

Our cool-down has finished but I find after a stressful day at work or if I’m just feeling angry or stressed in general, that I like to devote a few minutes to punch out my feelings on the punching bags. I finally can relate to Sandra Bullock’s character in Miss Congeniality! The anger seems to get literally punched out of her system. Punching a bag is my going to the pub to have several drinks, with the benefit of actually helping me to gather muscle eventually!

I feel as if I’m taking control of my own destiny. In the earlier classes, I felt so much anger at myself. I felt weak, small and insignificant. I’ve always had people who point out my small stature as being cute, but I can’t help but feel that it makes me an easy target. Our coach for our Tuesday sessions, seeing how frustrated I was getting, took me aside to reassure me that we all get there in our own time, to have patience, to take on and internalise all the moves. They will become automatic in time. Much of Krav Maga is based on the concept of using the attacker’s strength against them. I feel it teaches both self-defence techniques and life lessons. As cheesy as it sounds, just like when you’re upset so you eat your way through an entire tub of Ben and Jerry’s (I trust I’m not alone in this?) and watch all the feel-good comedies to make yourself feel better, you don’t give up when the going gets tough. If you’ve been delivered a punch and knocked to the ground, you get back up again and figure out how best to overcome it. It’s a lesson that someone who is as tough on themselves as I am would do well to note. We need to treat ourselves with kindness, patience, and to get back up and throw the punches towards those people and things that seek to tear us down.

So to anyone who might be thinking about taking a martial arts class, do it. You can take it for the same reasons I did; to protect myself and for good exercise (the gym bores me to tears) or for any other number of reasons….It is great exercise, you become self-reliant and *gasp horror*, you will gain muscle mass by actually doing something instead of just lifting weights, what’s not to love?