My breakfast: morning tea, coffee and a packet of chips that I’ve eaten because of my anxiety had been completely digested. I could feel the butterflies inside my stomach. Just then a small, round Japanese man answered me with his half-closed eyed smile, “There is the Berlin Wall!” I looked on my right. There was really something that looked like a wall, but is that the Berlin wall? I crossed the road to get a closer look at it. There was a steel plate with, “East Side Gallery” written on it. Below itwas written, “Mauer Berliner”. No need to say that meant Berlin Wall.

It had been two days that I was in Berlin. I had come here to visit my friend Nasty and not to see the wall. That was put in my schedule by my boss. My boss believes that news is to be found everywhere! If I were to say, “Look, I’m going to commit suicide” I’m sure he would say, in his grave and serious voice, as if I was going for a holiday, “Oh! You are going to commit suicide. That’s really good. But come back soon and write a short article on it.” And would invariably add on seeing your confused look, “you don’t have to make it long, 1 or 2 pages would be fine!” Is there any point in arguing with such boss? I don’t think so, and so, after having reached Berlin, when he told me by telephone that, I had to write an article on the Berlin Wall, which was at that moment subject to a removal process, as some real estate company wanted to make some modern flat there, I didn’t argue.

To tell you the truth I’m unable to write about serious or scandalous issues. Most of the time I find myself supporting the minority. Whereas a writer is always expected to support the majority. What if the same thing happens ? Actually, I was quite sure that it was going to happen!

Now that I’m in front of the Berlin wall, I was 100% sure that this wall, filled with graffiti and insignificant writings and drawings by the street “writers” and artists didn’t merit beingthere, in such neat, clean and nice country like Germany. I was really hopeless! How could I write that breaking this wall could be a loss for humanity? The only sentence that came to my mind was, “break this wall and clean up this place!”

I didn’t have to think any longer as my eyes were now on some Hindi alphabet in navy blue colour, written on dark blue background. Despite my poor level in Hindi,I read, “Kalakar: Narendra Kumar…”! I was unable to continue, for a shortage of patience! So I started to look for the English version. This is an international canvas, the artist must have written his name also in English. And finally I found it! “Artist: Narendra Kumar Jein” which means, it was painted by Narendra Kumar not by a German one who could have used Hindi script to give an exotic touch to his work! For a first time I felt any kind of “curiosity” about this wall. Something was definitely hidden in this piece of concrete and I decided to check it out!

Beginning of the journey:
Even if I’ve chosen this title, I didn’t really know where I was going. I could have left the Berlin wall after having seen N.K. Jein’s painting. But something held me back and want to explore it some more. 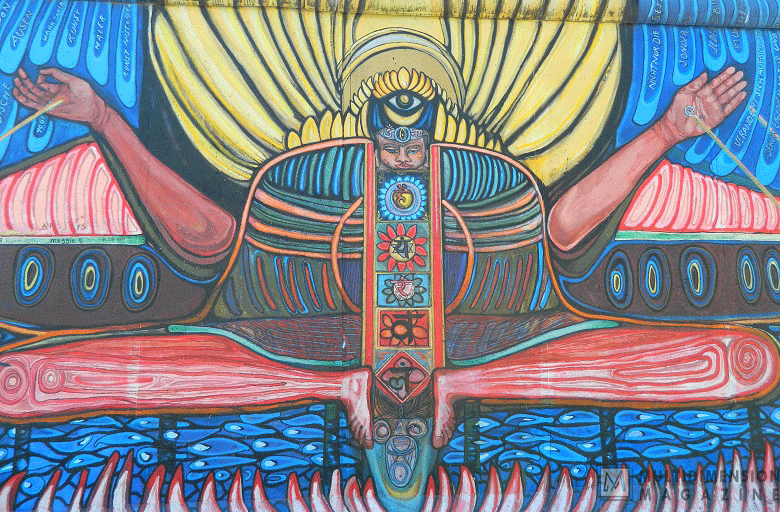 The painting of N.K. Jein was really nice. He used different shades of blue, pink, red and yellow. We can see a depiction of a Hindu god or a goddess. This god/ goddess had an extra eye in the middle of its two eyes. Under the figure, there was a huge lotus, and below the figure, some incomprehensible lines in German.

Apart from his own name the artist didn’t forget to draw a national flag of India. Under the flag he has written a symbolic message of peace and love in which he cited the name of Mohammed, Merry, Mahavir, Buddha, Padmavati.

I was so much overwhelmed to see such beautiful art that despite the extra eye, the posture of the depiction and the name of the man himself “Buddha” I didn’t understand much. After coming back to France, when I showed the photo of this painting to a friend, he said, “C’mon, it is Buddha!” “Its him !” I told myself. May be… may be not.There were lots of hints to come to the conclusion that it was indeed Buddha. But the person hadnamed personalities from many religions, so why would he represent only one special person? May be, may be not. But I will never know the answer, because I never contacted Mr Jein.

Something to be noted: the whole berlin wall is covered with paintings like this. In total there are 106 paintings and 116 artists’ work on them. When the border was removed between the two berlin in 1991, a big art competition was organized in which these artists were selected. Berlin wall is about 3, 5 meters high. No doubt that such international public canvas is a dream for an artist.

In the next picture, I could see the David’s star in a yellow, black and blue background. Of course, the star reminded me of the Jewish people. When I was in 12th grade, the content of half our history syllabus was 2nd world war. At that time I learned a series of words which could go together: Germany, Hitler, Jewish, concentration camp and Gas Chamber. 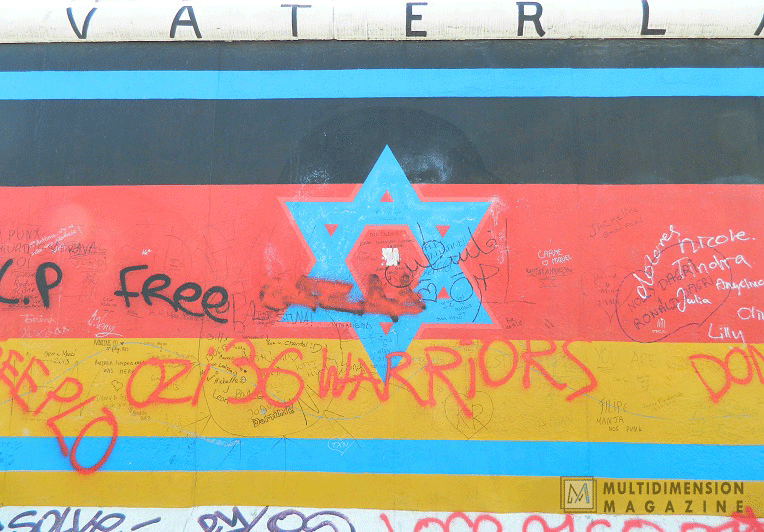 The most interesting part was concentration camp. A place located nowhere, with no goal behind an act. The prisoners didn’t know what they had done and why they were there. Actually, the only goal was to put them to death. I kept thinking who could have draw this star, here, on the Berlin wall! A Jewish person may be? To show that now they are free to stay here! What about all these colours in the background?

Suddenly, I found myself in front of the picture of Gorbachev. Gorbachev was the president of USSR from 1985 to 1991. It’s known to all that history is taught differently from one country to another. Being a part of French education system, I learnt that Gorbachev was a “hero” who took the USSR in his arms when it was on its death bed. Whereas, according to my communist uncle from Bangladesh Gorbachev was an agent of America, came to power with American help and failed because he was in no way a good leader!

This was the 3rd time that I was seeing Gobachev. The first time was in my book of 12th grade, the second time at Madame Tussauds and the third time here, on Berlin wall. Undoubtedly, the one at Madame Tussauds looked alive, but here I found him more lively.

In the painting he is driving a car. The steering wheel of the car represents the communist’s symbol, a sickle and a hammer. What does that mean?! What image is the artist is giving Gorbachev? The rescuer of USSR or the villain from America?! What about the steering wheel? Does that represent the suffering USSR at the last moment that Gorbachev tried to drive it in his own way, or was he simply taking flight! Or, was it something else that my hardly ever used brainjust couldn’t quite figure out? I don’t know. I really don’t know…

I was feeling like I was in a dream. As if I was not watching a wall, but a live historical theatre. 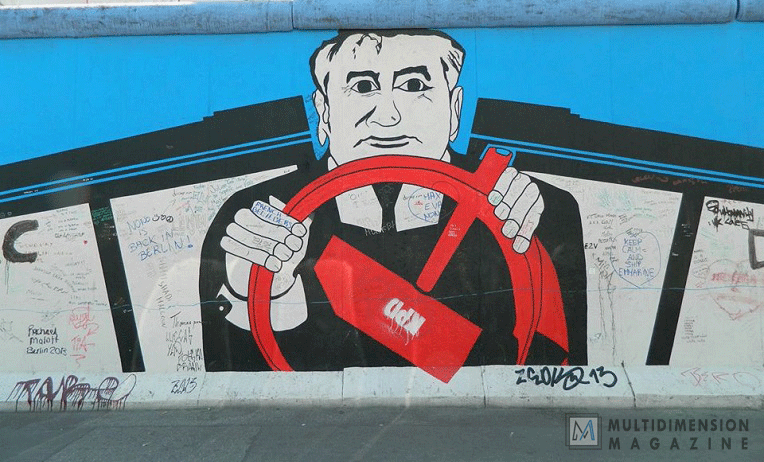 The next painting was very big. It took me 10 minutes to see the whole picture, and 10 more minutes to see it more carefully. This painting has 4 male and female bodies. I’m saying “body” because, there were no human head. Instead, there were some square shaped boxes with protruding forks. Each fork has a banana stuck on it. I vaguely understood the meaning of the half bodies with square shaped head with the fork (looks like some science fiction movie characters) but I really didn’t get the reasons behind those bananas! This picture was painted by Cesar Olahagaray, who by return mail answered me politely, that he was trying to represent our future in this materialistic world. The 2nd part of the picture shows a prehistoric animal whose head looks like a monitor. This monitor is connected to a machine which is mashing up some human bodies.

Another artist’s picture was tied up with CO’s picture, in which we see some balloons. At first sight we may think that these were blown up for kids. But when we see it more carefully we can notice that these were not some simple balloons. Each of them contained a pipe. Overall, they looks like some pumping materials.

This picture’s title was “Pneumohumanoid” which means “half man and half machine”. This picture was also as futuresque as the one of Cesar Olahagaray. One of the balloon or “pumping machine”, according to my thoughtful observation, was delivering some liquid to a strange looking “animal” in the C. O’s picture. The message was so clear: the day is not far, when we won’t need to have a useless thing such as the body. (Actually, we don’t even need a brain nowadays and seems in future there will be a computer instead of our head). There will be a hole to supply proteins and other minerals, and another hole to throw out the rest (unless there are simpler or better idea) But… What if someday all the computers crash or all of them are jammed or broken! Who will repair them? I looked at my cellphone. I cannot take a single step without it. At the beginning of the cellphone era I used to learn some numbers by heart. Now I just have to remember the first alphabet of each name and the cellphone does the rest. I took a deep breath. How technology is affecting our natural capacities. I kept walking. The history was walking along me. The future was walking with me.

I saw the picture of reunification kiss, which could be seemed as a homosexual act but it was the moment of the reunification of the two Germany. A simple gay kiss would be tolerated on such a historic moment! During the post removal era, there was a check post between the two Germanys. I saw a troll image of that. The way was not easy. There were obstacles created by graffiti and the “street writers” extremely creative “writing”. One of those was, “need weed?”
To be continued in the next issue…