A Critique of Modern Democracy- Part 2

In the last issue we talked about the binary aspect of the universe, where, when two forces having opposite effects, meet, create a kind of equilibrium when they are equal; and if not equal create a dynamic situation. This is almost a mirror reflection of the ways in which the laws of physics work in the physical universe. In human society too, we see such a binary combination at work, resulting in what we may describe as hierarchical pyramids. In such a simple pyramid the people in society can be said to be distributed in a manner where the masses of people are spread out on the broad base of the pyramid while the few most powerful are squeezed in at the narrow top

On the top of the pyramid are very few people (or institutions), often ones, in which power is concentrated 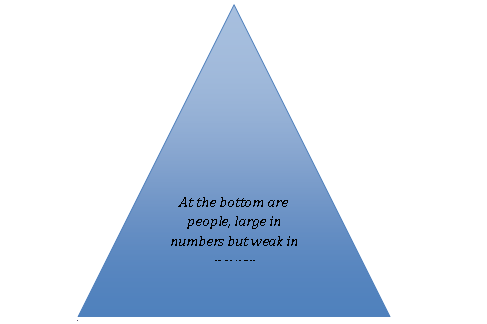 The two forces at work in such a hierarchical structure are quite simple. At each end they are pulling at the other, attempting to garner more wealth and power and rights for themselves and away from the other. When the people at the bottom of the pyramid manage to do so and make it a flatter pyramid, we may say it is a more democratic society. On the other hand, when power is concentrated on the top, in very few hands we say it is an autocratic society.

While terminology and details may differ interminably, and the variables are multiple and complex, the basic principle described here remains unchanged when we look at societies. And since human beings communicate and function primarily with symbols, they tend to become ritualistic, hanging on to symbols long after they have transformed beyond what they originally symbolized.

This is what has come to pass in Western democracies over time. (It should be noted that I use the term “Western” denoting all the European and Euro-centric powers who had progressively colonized the world in the last 5 centuries, as they alone controlled their own destinies(as far as humans do control their destinies). Therefore, the history of modern democracies as we know it, took place in their countries, while the rest of the world,which had lost control overtheir destinies, were left out of this process of democratization (even if it was their wealth which was funding the economic, technological and socio-political progress of the colonizers). Like a pendulum theygradually began to go from being highly autocratic nations, where the people struggled and fought for their rights, earning each one with many sacrifices, to that of modern democracies. History is replete with examples. In effect, they started to flatten the pyramid. But as human nature is highly prone to the law of diminishing returns, and so the urge to continue the struggle for democratic rights diminishes every timetheyhave gained a few; and then it languishes till oppression is back in force before the process begins all over again. Customs, mores, values and other social and psychological criteria, which are also variables in the ongoing dynamics, and change with time, as it does with the influences of other cultures. Thus, the forces acting on the pyramid, to flatten or lengthen it are really quite complex; binary only regarding the direction they are acting in.

Political philosophers realized that whenever people came together to form communities and societies which outgrew what we may call a primary size (where each individual in the group has primary contact with every other member), we have a problem of representation. Only then is there the question of who is/are the leader/s. Earlier, in the smaller groups it was quite easily decided. The strongest became the leader (as in the socially grouped animal kingdom). As societies grew the hierarchy itself became more complex. Choosing your leaders became a more rationalprocess that appealed to people who were beginning to understand that physical strength was not the only criteria in good leaders, and increasingly, not even the most important one. The complexity, variety and range of the required skill set for leadership kept on expanding as time went by. In modern societies it is entire political parties that take on the role of leadership, providing such skills, not in a single individual but througha number of its top leaders. Despite that, the effect of individual personalities is still very big on our psyché and keeps harking us back to personality cults.

What exactly are the primary elements of this tug-of-war between the people and their rulers, their leaders, their governments…? As societies evolved over millenniums, social structures became more organized. At some point (in Europe we can loosely say the Treaty of Westphalia in 1648 after the 30 years War, was such a point) the nation state came into being. Worldwide, it was more of anongoing process than a single point of time. The modern nation states were born in various ways. At times it was top-down and the people didn’t have a choice. Nationhood was imposed upon them as a result of wars, treaties, colonization and its aftermath…breakaway colonies by rebellion or in peace. At others, it was more natural, where a homogenous group evolved to become a nation state. It could be a mere fact of geography such as in the case of Britain, Japan or New Zealand.
The territory a nation state exercised its sovereignty over became the most important aspect of the state. It had to be recognized by all who mattered. Dispute over this meant war. It took many wars, great and small, for a general acceptance over what territory each country possessed. Even today there are a good many places in the world where territory is disputed between countries.

As nation states started taking on a more formalized and structured shape, their hold on their citizens became stronger. They were able to subject them to their laws (the law of the land) as well as collect taxes from them and require them to join the military at the will of the state. Reciprocally, citizens demanded the state to bear responsibility for an ever-increasing number of their needs. Thus began the process of negotiation that is at the center of political life in one form or another.