With the global population set to increase to nearly 10 billion by 2050, climate change has become a major global crisis. If you have been paying attention to the news, the Pacific North West in USA, such as Seattle and Oregon areas, has been experiencing temperatures as high as 104-112 degrees last weekend alone. Such events of extreme weather are becoming more and more common with a likely trend projected to continue as per the Oregon Climate Office. In recent years climate change has played an undeniable role in catastrophes like the California Wildfires and the fires have shattered devastation records every year with last year being the worst. At this point merely pledging to reduce greenhouse gases will not heal a worsening climate. We must simultaneously adapt to an already changed climate with the help of the tools that we have developed in labs in the past few years.

Plants have a love hate relationship with climate change. On one hand plants capture 123 gigatons of carbon via photosynthesis. On the other hand, agriculture has an immense carbon footprint. Additionally, as per National Geographic by the end of the century plants will consume a lot more water, leaving less for humans. This is because a warmer climate also means a longer growing season for plants, that results in increased water consumption. This is further exacerbated by a spike in global CO2 levels which has jumped from 270 to 412 ppm in just 10,000 years. Unless there is a miraculous reduction of greenhouse gases, the chances of a slowdown of the spike are very slim. It is important to realize how demanding agriculture can get when we are coping with food shortages. Aside from climate change, biodiversity loss is another detriment of intensive agriculture.

In order to tackle both a changed climate and food shortage simultaneously, scientists and farmers have been getting very creative with their approaches. For instance, it is vital to understand the plant before we start making changes to its biology. Research has shown that passing bioimpedance- current through plants can tell us about its diseases, nitrogen and water content, mineral content and so on. Recent work from KAUST can detect the levels of dehydration and light exposure as well. When available to farmers this information can prevent crop loss and help enhance precision farming. Aside from understanding crops better, several scientists across the world are coming up with ways to help use what land is already available to increase crop yield. One notable tool that is being used widely is CRISPR, or clustered regularly interspaced short palindromic repeats. This gene editing “molecular scissors” technique is usually used to edit undesirable genes such as silencing genes to enhance production of a compound or an enzyme. However, researchers in University of Maryland have used CRISPR to activate genes. Researchers have used this ‘third generation’ technique to activate a range of genes in rice, tomato and Arabidopsis (a model plant) to fast track flowering and as a result breeding.

Its important to remember that while increasing CO2 levels may seem favorable for plants, rising temperatures pose a big threat to crop yields. While CO2 is a key component of photosynthesis, enzymes like Rubisco – Ribulose bisphosphate carboxylase oxygenase (more on this later) tend to make more mistakes at higher temperatures. These enzymes also lose some of their efficacy and integrity at higher temperatures. Additionally, open pores on leaves or stomata can remain open longer to cool off and thus make the plant lose water. In world where temperatures are steadily rising every year causing crop losses ranging from 3% to 7% , one needs to utilize every resource at hand to stop an eventual calamity. Fortunately, scientists are known to overturn predictions and make fast progress under pressure.

A little-known cyanobacteria can hold some of the answers to some of the problems of our warming climate. Cyanobacteria are the oldest known fossils and an aquatic photosynthetic bacterium. Nostoc flagelliforme or fat choy, is a cyanobacteria consumed as vegetable in China. This organism thrives in dehydrated situations by remaining dormant for years. Scientists in Wuhan, China are studying Nostoc to understand the reason for its superior drought adaptation and how this may be used to modify crop plants for future. They found that protein complexes under heat stress need to be repaired often, which is dependent on certain chaperone heat shock proteins. In Nostoc these chaperones are made in larger amounts during heat shock. Amazingly overexpressing these heat shock proteins in algae or higher plants increased their heat tolerance. This tiny organism maybe thus hold the key to solving several drought related crop issues. 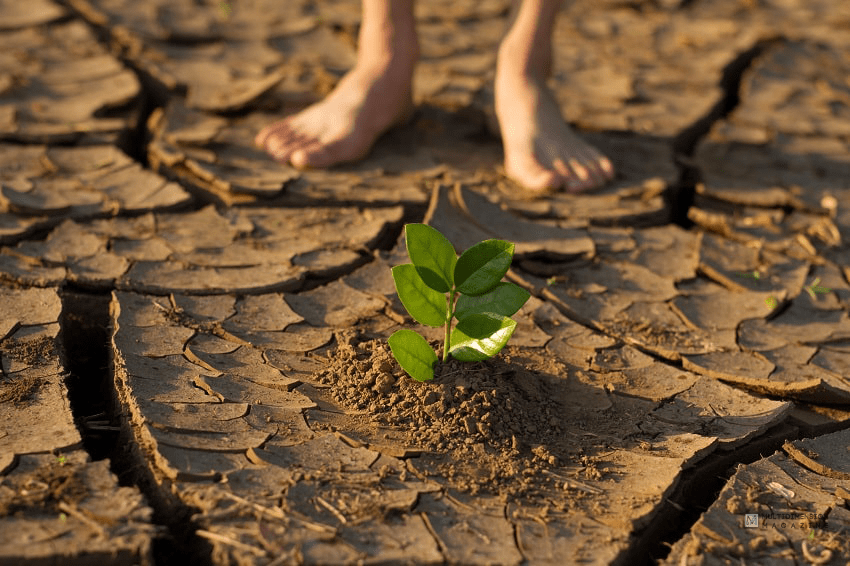 An international project called Realizing Increased Photosynthetic Efficiency (RIPE) has a team of scientists working on improving photosynthesis to meet food shortages. Photosynthesis may be something we stopped paying attention to after our fifth standard, but it can hold several keys to improving food security. By realizing what the bottlenecks of photosynthesis are, we can improve yield and biomass. One such way is understanding how plants protect themselves from excess sunlight by a mechanism called quenching. Excess sunlight can cause bleaching in plants but quenching inadvertently also reduces photosynthetic efficiency. This is because the mechanisms that protect the plants can take some time to reverse back to full photosynthetic potential. Three proteins were identified in tobacco that helps plants adapt quicker to changing light intensity thereby increasing yield by 20%. Agriculture also uses 90% of global freshwater supply and in a growing population where both food and water are short, steps need to be taken to utilize water better. As mentioned before, stomata can let out moisture when open. By working on increasing the expression of a photosynthetic protein (Psbs) plants tend to close stomates more often and use water conservatively. This and the above technique of modified light usage can really arm crops with tools they need in a changed climate.

Another common roadblock is the aforementioned enzyme Rubisco. This enzyme can fix both CO2 (less abundant) and oxygen. The compound formed by Rubisco using oxygen (glycolate) is toxic and is recycled by the plant, using energy that can be better used elsewhere. Scientists have also found that the recycling process takes a long-drawn route which uses a lot of energy. Scientists at RIPE identified a set of genes that can help bypass the long process of recycling glycolate more efficiently. Plants grew 40% taller as a result of photorespiratory bypass and this technique is now being tried in crop plants.

Genetic engineering of plants has given us several tools to manage food shortage. Scientists are not just relying on one aspect to increase yield in a changing global climate. From managing water supply to drought resistance to synthetic engineering of food crops, no stone is being left unturned. However, our responsibility as citizens does not just stop at believing our scientists to do the right thing. We need to come together and ask our local representatives to increase funding for basic research. Remember even the ‘speedy’ COVID vaccines that has made our lives normal again were made using knowledge developed by years of basic research.

Read More :
Is the current reduction in greenhouse gas emissions a good thing ?